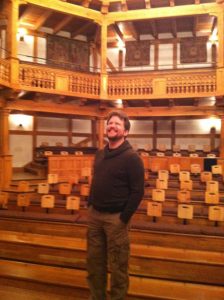 Tee Morris is social media professional based out of the Washington DC/Virginia/Maryland metro area, and an award-winning author of science fiction and fantasy. Tee’s writing career began with his 2002 historical epic fantasy, MOREVI: The Chronicles of Rafe & Askana, published by Dragon Moon Press and the first novel to be podcast from cover to cover. It was MOREVI’s podcast that led to this team-up with podcaster Evo Terra for the original Podcasting For Dummies in 2005. Since then, he has written four other titles for social media professionals, including Social Media for Writers, penned with his wife, Philippa Ballantine. Both Tee and Pip continue to podcast together with their Parsec-nominated podcast The Shared Desk, and continue to write together in The Ministry of Peculiar Occurrences, a steampunk series that has won several Parsec awards as well as numerous literary awards including RT Reviewer’s Choice for Best Steampunk of 2014.

Find out more about Tee Morris at www.teemorris.com and at www.ministryofpeculiaroccurrences.com.

In “real life,” Chuck Tomasi is an IT professional with over 35 years of experience. He is currently employed as a Sr. TPMM at ServiceNow, a digital workflow company. Currently residing in Phoenix Arizona, he is a devoted husband and proud father of two beautiful girls. As for his alter ego . . . Chuck was bitten hard by the podcasting bug (there’s an understatement). He was so eager to get started in late 2004 that he made a few tweaks to his self-written blog software and had the feed ready to go. Since then, he has migrated to WordPress and produced over 1,000 episodes across multiple shows. The longest running being Technorama, a light-hearted geek show that he co-hosts with Kreg Steppe. In 2011 Technorama took home a Parsec Award for best comedy/parody. Chuck has also been given license to employ his podcasting talents at work garnering notoriety with a series called TechNow. This show is targeted towards ServiceNow administrators and developers and is co-hosted with Kreg Steppe and Dave Slusher (also podcasters.) When people talk about podcasting with passion, Chuck’s enthusiasm comes to mind.

Learn more about Chuck at his Web site: www.chucktomasi.com.